The evolution of the corn head and the quest for maximum yield.

The first corn head was introduced more than 60 years ago. How have they changed since then?

The year 1954 was revolutionary for corn harvest mechanization. It was then when U.S. brands John Deere and International Harvester introduced corn heads for combines. And a European brand called Olimac introduced its “Integral Head” that could both pick and shell corn, too. 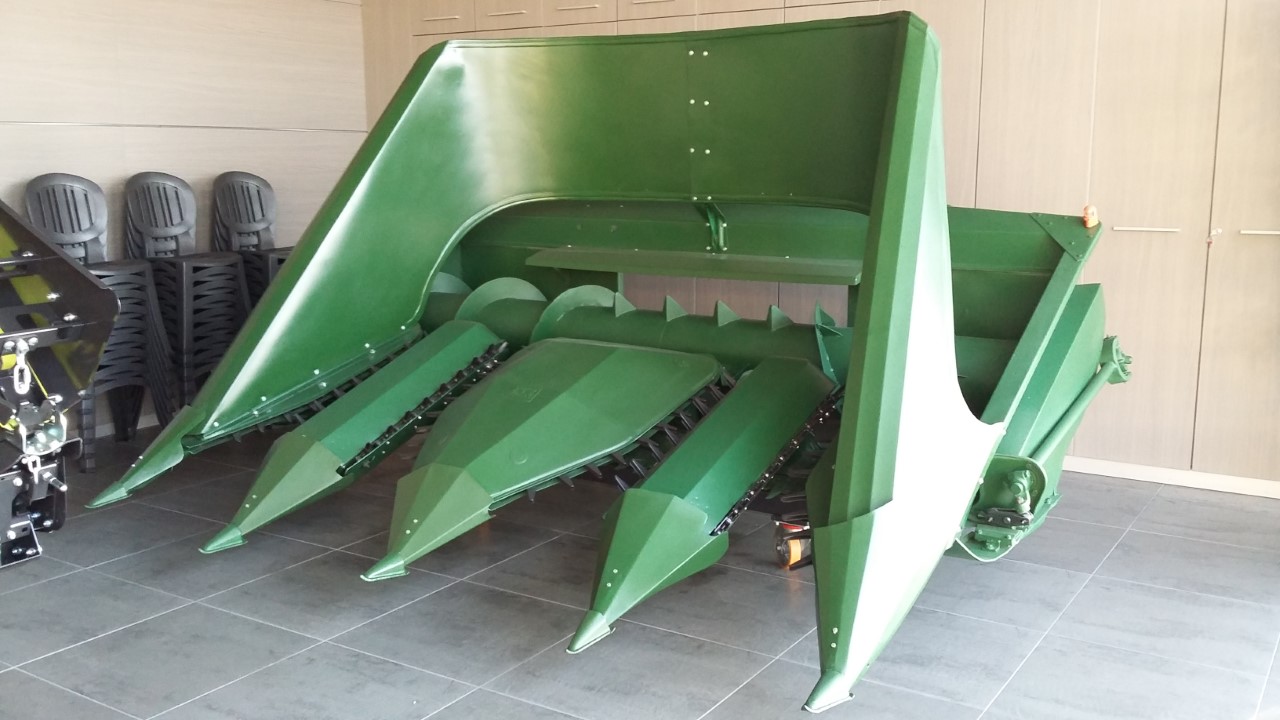 Olimac introduced its “Integral Head” into the European market in the early 1950s as U.S. brands introduced theirs. The head pictured above is the actual first head ever sold.

“The basic structure of the first corn head is very similar to all modern-day corn heads,” says Iowa farmer and Dragotec President, Denny Bollig. “They typically all have some type of stalk roller device, deck plates, a pair of gathering chains and a cross-auger that moves corn into the feeder house.

“For four decades, we had corn pickers without deck plates – they just had long snapping rollers,” Bollig says. “Back then, corn typically was wet and kernels were so firmly attached to the cob that butt-shelling wasn’t a serious issue. With the advancement of hybrids that could dry down faster, the loss from butt-shelling became horrendous.”

“The introduction of deck plates – that were then bolted on – was driven by that harvest loss, Bollig says.”

As corn head technology evolved, Bollig said John Deere corn heads built in the 70s were a benchmark for other brands. “They were very reliable and simple, but 50 years later the basic mechanics of their heads have changed little.

He says in recent years, most corn head features that reduce yield loss have been driven by other brands.

“Thirteen years after Olimac came out with hydraulic deck plates, John Deere followed suit in 1995,” Bollig says. “And that was a big thing at the time. “Olimac had designed that adjustability because they saw a yield loss occurring that demanded some kind of change.

Bollig says that when Olimac introduced hydraulic deck plates in 1982, corn heads were still relatively small. “You could be a little more accurate on your adjustments because you could actually see both ends of the corn head. Today, with corn heads having three and four times as many row units as they had then, we know hydraulic plates are unable to compensate for the plant variability that allow kernels to slip through.

“Yield loss pushes change,” Bollig says. “When we consider 60 percent of yield loss at harvest is at the corn head, Olimac is pushed to come back with new and better ideas, which is why they introduced automatic self-adjusting deck plates on each row in 1997.

“No other corn head brand offers that yield saving feature.”

Other changes include the shape of the deck plate itself. “Drago deck plates feature a rolled edge about a half-inch thick, “Bollig says. “The design allows the plant to be pulled down and strip off the ear, while minimizing stripping off the leaves.

“If you have a thinner edge, it’s almost like a knife and the stalk is likely to kink or break off. We want to reduce the amount of plant material going into the combine so it can be more efficient.”

There are differences in gathering chains, too. Bollig points out that Drago gathering chains are placed out-front of the corn head where they can grab stalks – a feature that pays dividends in downed or leaning corn. “Other chains are simply designed to move ears after they’ve been removed from the stalk, but ours are designed to improve yield.

“Yet another design feature is that our chains actually fade apart as they move to the back of the row unit. This is so they can let go of stalks, limit breakage, and reduce plant material moving into the combine. Reducing material other than grain into the combine enables more efficient threshing, less wear, and less harvest loss out the back end” Bollig adds.

Bollig notes that brands offer different kinds of stalk rollers. “The job of a stalk roller is to pull the plant down fast enough that it separates the ear, but not so fast that it causes butt-shelling,” Bollig states. “Drago knife rollers are the longest in the industry, so they have more time to process corn and without having to run as fast as other brands.

“Some brands give their stalk rollers more to do, including sizing up plant material along with pulling the plant down,” Bollig says. “But you need a lot of power to do that and they have to run them fast, which can result in added butt-shelling.

“Of course with the GT, Olimac went to a whole new level by adding shock absorbers under the deck plates to absorb the energy of those ears hitting the deck plates,” he adds.

“Sizing stalks has the benefit of helping plants break down faster, as well as to open stalks where corn borers overwinter, but rather than risk additional butt-shelling, Olimac’s answer was to introduce a chopper to cut stalks instead,” says Bollig. “Our GT model, in fact, features a twin-chop option with counter-rotating blades that deliver the best sizing option in the industry.

“Again, what drove those design changes was a company looking for ways to reduce yield loss.”

Yet another subtle but important evolution in corn head design involves the cross-auger. Bollig says the diameter of the Drago GT cross-auger center tube is exceptionally large in diameter. “And the reason for that is to help keep the corn in the feeder house.

“All combine brands have a certain amount of back-feeding, but the large tube on the GT blocks the window of escape for an ear of corn that’s getting back-fed.

Bollig mentions that other subtle changes in corn head design include the profile of the corn head itself.

Drago corn heads run at a flatter angle than other corn heads, allowing you to get lower to the ground which helps harvest plants having lower ear placement. “The flatter angle helps reduce loss from ear bounce, too,” Bollig adds.

“The lower profile is especially beneficial in downed corn where it helps get low and stay underneath plants, all the way down to our points and helps lift ears to the auger easier with less damage from chains.”

“Even the type of points can help reduce yield loss,” Bollig points out. “We offer two styles of points that go on the snoots,” Bollig adds. “If you’re in fairly flat terrain and you want a point that gets a little closer to the ground, we offer an aggressive tip. Our standard point runs another inch or two higher off the ground for more normal conditions.”

“When it comes to corn head changes, it’s one thing to have apparent improvements such as self-adjusting deck plates or shocks under the plates, but subtle design shifts like gathering chains angling away, or knife rollers that process plants their entire length, are just as innovative, too.

“The ultimate goal is to get more yield while managing all the different conditions you might run into at harvest,” Bollig says.

“As a farmer, you never know what harvest is really going to be. You hope your crop will be standing straight, but we know we’re at risk – right up to the day you pull the combine into the field – of having that corn blown over by wind, breaking off or lodging.

In 1900, one person could shuck about 100 bushels of corn in a nine-hour day. Today’s combines can shuck and shell over 100 bushels in less than five minutes.