Corn growers understand the critical role of deck plates for capturing yield during harvest. University studies have shown that plate gaps as little as 1/8” wider than stalks could translate to a potential yield loss of four bushels per acre.

And while producers using operator-controlled hydraulic plates generally express confidence in their ability to manage gaps, a harvest comparison with automatic, self-adjusting deck plates suggests potential yield loss may be more significant than they believe.

Drago has long described the advantage of its automatic, self-adjusting deck plates for minimizing gaps and limiting yield loss during harvest. To substantiate its claim, Drago conducted a field study to measure the gap “decisions” of its automatic deck plates.

The study revealed some eye-opening facts about the variability of corn stalks and the potential yield loss associated with it.

This yield report was pulled to demonstrate the yield variability of the 1.35 acres harvested for the study. The field experienced above normal rainfall during much of the growing season.

Most growers over-estimate the yield-saving performance of hydraulic deck plates in harvest conditions.

“We wanted to quantify the overall ability of Drago’s automatic deck plates to minimize gaps and related yield loss in harvest conditions,” Bollig says. To help conduct the study, Drago worked with HeadSight® an independent manufacturer of header height control systems, for measurement and analysis of deck plate movement. “We provided electronic sensors, reading in millivolts, that have the capability of measuring movement to the 1000th of an inch,” says Rob Schlipf, Director of Engineering at HeadSight. The sensors were attached to the right and left deck plates of a 12-row Drago GT corn head.

The sensors revealed significant variability in stalk size within the row.

“As the Drago corn head worked its way through the field, we not only could track the number of times deck plates moved, but how far apart they moved,” Schlipf says.

The results confirmed what Drago suspected and more.

Nearly 163 decisions per row per minute

“The sensors revealed a significant variability in stalk diameters — plant-to-plant as well as row-to-row,” Bollig says. “Harvesting at 4.0 mph, the automatic deck plates averaged 163 decisions per row per minute — adjusting from as little as 1 / 8 inch to as much as 1 / 2 inch.”

“We were all aware of the variability in the field, and pleased to see how responsive the deck plates were adjusting to it,” Bollig says. 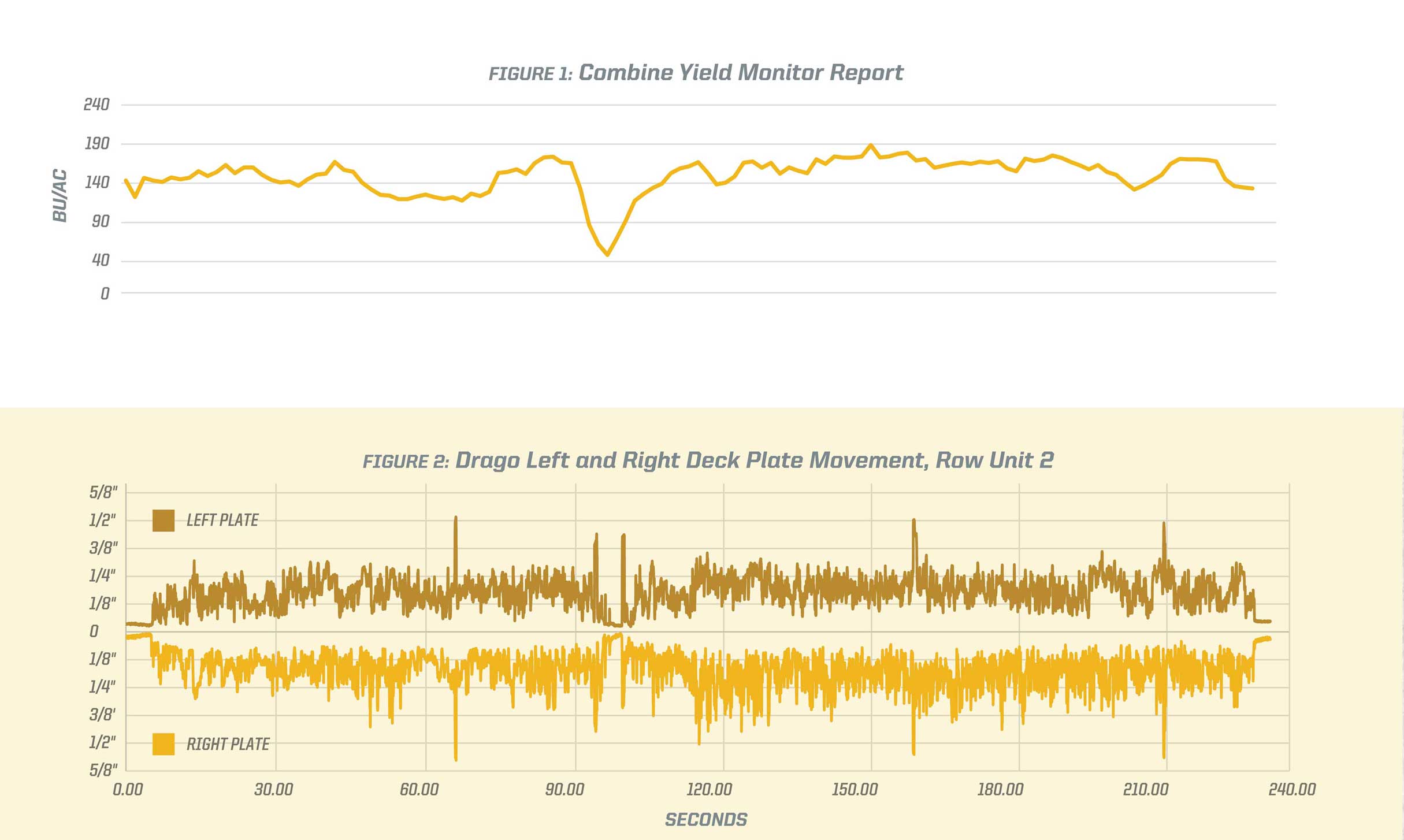 Electronic sensors, placed on the left and right deck plates in a 12-row Drago corn head, measured deck plate movement in millivolts during harvest — 150 millivolts equals a movement of 1/8. The above chart was pulled from the #2 row unit following the same 1.35 acres harvested, shown in Figure 1 above. Gap movement is shown in 1/8 increments. Compare Fig. 1 and Fig. 2 — notice how both deck plates move equally, corresponding to changes in yield.

On a per-acre basis, the automatic deck plates made nearly 5,390 decisions involving adjustments from 1/8” or wider, including 1,582 decisions of 1/4” or more, and 196 decisions of 1/2” or greater. “Keep in mind that the threshold for deck plate yield loss starts at 1/8”, and each row unit averaged 606 independent decisions per acre involving that and more,” Bollig says. “The data also showed how both the left and the right deck plate of each row unit on the Drago GT worked in unison to minimize gaps.” See Figure 2.

“Hydraulic-controlled deck plates are unable to compensate for row-to-row stalk variability, let alone the plant-to-plant variability within each row,” Bollig says. “Having the same gap setting for every row unit on a corn head assumes all of the stalks running through them are the same, too, and we know Mother Nature just doesn’t work that way.”

One of the more remarkable stats from the study is “deck plate spacing as a percentage of time,” Bollig says. “It illustrates the percentage of stalk thickness in the field we harvested. If your plates were set only for the most common stalk thickness, you would have been off nearly 75% of the time.”

“Operators can’t possibly react to variability that’s out there. As it is, they are unable to see where their deck plates are set relative to stalks,” continues Bollig.

“When we looked at the data, we realized the farmer-operator had made only one deck plate adjustment within the designated harvest area,” Bollig said. “This was adjacent to the same area where the automatic deck plates had literally made thousands of independent gap decisions,” he points out.

“Of course, we don’t know how other producers would have reacted in that field, but what we saw is likely more typical than not. From the cab of a combine, any visual change in stalk diameter has to be significant. Most of the time, farmers just open their plates until they don’t push stalks and forget about it,” says Bollig. “Their confidence in managing deck plate gaps from the cab is based on the belief that ‘a good stand’ means minimal stalk variability in their fields, and we know that just isn’t true.”

“The ability to manually adjust deck plates has led to a false sense of their performance for capturing yield. The study confirmed the value of automatic, self-adjusting deck plates for minimizing gaps and capturing yield every minute and in every row the corn head is working,” Bollig says. “When you multiply the potential yield savings by the number of corn acres you grow, the difference can be significant.”

“Today’s farmers have too many distractions in the combine with too much variability in the field to adequately manage their deck plates,” notes Bollig. “And it’s costing them yield. When corn was seven dollars, we wanted every kernel and now when corn is at four dollars we need every kernel.”