Downed corn can put a dent in yield potential

At harvest time, farmers say there is no greater concern when it comes to yield loss potential than downed or wind-damaged corn. Of the more than 450 corn farmers responding to a Dragotec USA survey, 67% say it is the greatest factor influencing yield when the combines run. And, those concerns are growing as corn market prices remain in bearish territory.

If corn plants have lodged and aren’t standing upright, grain may not make it into the bin, leaving the farmer with a field full of untapped crop revenue at harvest’s end. Minimizing the amount of yield lost from downed, lodged or wind-damaged corn often depends on having the right equipment during harvest, says Fenton, Iowa, farmer and Dragotec President Dennis Bollig.

“It’s one of those frustrating things about farming. In a matter of minutes, everything you have strived for can be chewed up and laid flat by Mother Nature,” he says. “When corn plants lodge and go down, the yield is still there. You just have to go down and get it.” 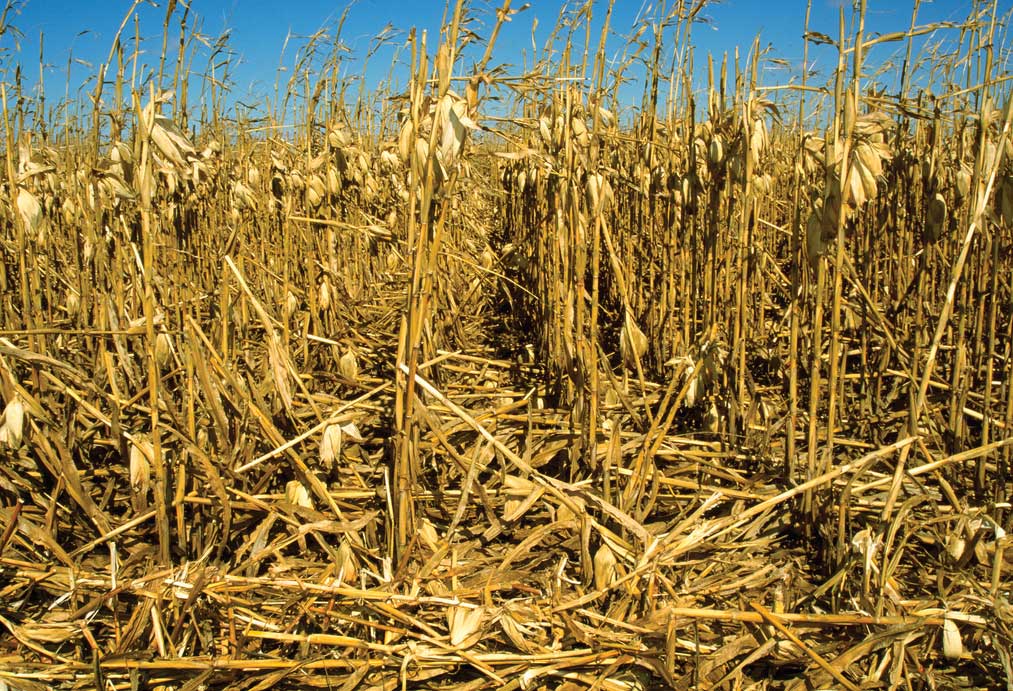 The causes for lodged or downed corn start with the conditions in which a corn crop grows. The most common environmental factor driving downed or lodged corn is severe weather. Even in short bursts, high winds can lay down a plant, and while corn is resilient, its ability to bounce back depends on the time of year and severity of the conditions that caused it to go down.

“You can have perfect corn plants, and in 10 or 15 minutes of a super cell with a downdraft, even the best corn out there will be knocked flat or broken off. It can happen so quickly,” Bollig says.

Take any corn downed by severe weather during the growing season into account when beginning harvest. It’s best to start with any downed areas to minimize ear loss because as plant material starts to dry out and break down, yield loss potential mounts quickly, says Iowa State University Extension ag engineer Mark Hanna.

“Scout fields to determine where problem areas are and the condition of stalks and ears. Harvest the problem areas first when field conditions are better and before ears in close proximity to the ground have an opportunity for potential further deterioration,” Hanna says. “An exception might be made to harvest an area with particularly weak stalk strength that is still standing if the odds of lodging from weather seem high.”

The role of crop management

Crop management has a big influence on whether corn will lodge or go down. Today’s production practices are pushing yield thresholds higher, with 300-bushel/acre corn much closer to reality for farmers than it was a few years ago. Seed genetics have advanced to improve both standability and yield potential, and farmers are generally increasing plant populations in an effort to get more bushels out of every acre.

The latter can be a big contributing factor to yield loss. Because of the concentration of organic matter that can attract pests and disease, higher plant populations can lead to root or crown rot, even if you have average conditions.

In order to prevent these types of issues from causing rot, lodging and downed corn that ultimately lead to yield loss, it’s important to plant populations that your soils can sustain and to scout regularly.

Reducing corn yield loss at harvest in downed or lodged corn takes both the right machinery and specific attention to how it must be adjusted in order to pick up and process corn plants hugging the ground. Hanna recommends the following steps to ensure any corn head and combine is ready for a field with downed corn:

**Set deck plates carefully.** If a producer is running a corn head with hydraulic or bolted deck plates, make sure they are “only slightly wider than cornstalks” in order to cut down on stalks breaking off before ears can be removed. If running a Drago corn head with automatic self-adjusting deck plates, variable stalk sizes are accounted for in each individual row.

Get low, but not too low. “Operate the head as low as practical without picking up rocks or significant amounts of soil,” Hanna says.

Adjust how you drive. Moving against the grain of the stalks of downed corn can reduce harvest losses. “Evaluate losses, though, before spending large amounts of time dead-heading through the field,” he adds.

Slow everything down. Harvesting slower than normal if harvesting downed corn is typical. Make sure everything is adjusted to account for the necessary slowdown.

“If harvest speeds are significantly reduced, the amount of material going through the combine is reduced. Fan speed may need to be reduced to avoid blowing kernels out of the combine and rotor speed may also need to slow to maintain grain quality. Check kernel losses behind the combine and grain quality to fine tune cleaning and threshing adjustments,” says Hanna. 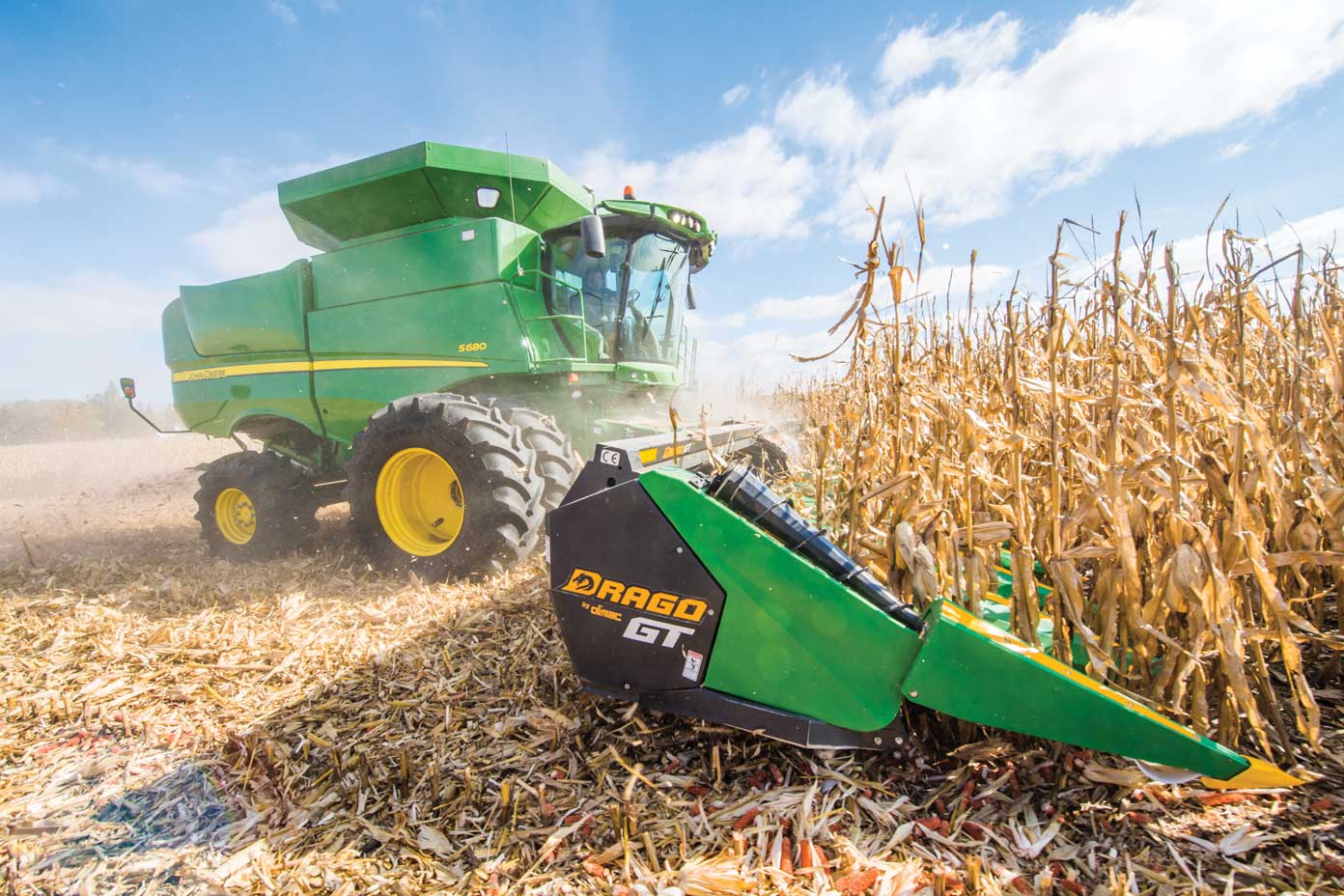 Once the machinery has been adjusted, Hanna adds it’s important to remember that harvesting downed or lodged corn takes longer than standing corn.

“It’s all about going out there and getting that downed corn. Drago is unmatched in picking it up,” Bollig says. “Our aggressive overlapping gathering chains reach down, pick it up, get it in the row unit and get it going through the combine.”