A multiyear study found that stalk variability increased with yield, especially in 200-bu. and higher yield environments. The implications of the results indicate there is more potential yield loss in higher-yielding environments for corn heads equipped with manually adjusted hydraulic deck plates compared to those that self-adjust. 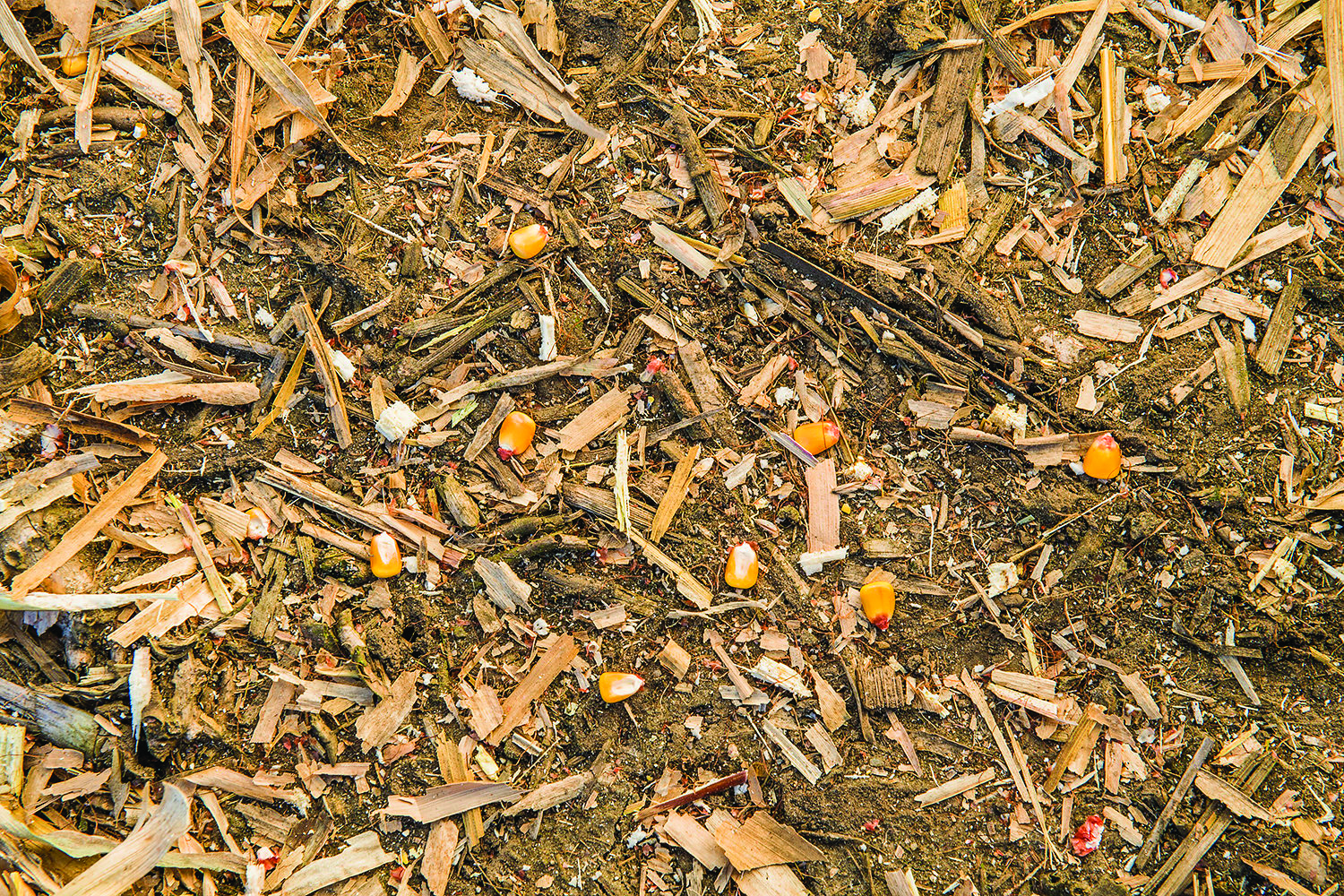 Sixty percent of yield loss during harvest is at the corn head. Along with ear bounce, studies have shown that deck plate gaps as small as 1/8 inch between plants and plates can result in a one to four bushel per acre loss.*

“What we’ve learned is that growers over-estimate the yield-saving ability of hydraulic deck plates in harvest conditions,” says Dustin Bollig, farmer and vice president of sales and marketing for Drago. “There is just too much stalk variability to think that a manual hydraulic deck plate adjustment now and then can compensate for the dozens of different-sized stalks running through the corn head at any given time.

“Our 2020 harvest research confirmed what we saw in 2019: That there is a direct correlation between stalk variability and yield,” says Bollig. “And it isn’t what most people think.

“Our analysis of more than 100,000 data points shows that higher-yielding corn — especially 200-bu. and higher — has greater plant variability than lower-yielding corn,” Bollig says. “That’s counterintuitive to what most producers believe.

“In fact, the number of deck plate adjustments nearly doubled in 200+ bushel corn."

“What it means is that your best fields have the highest potential kernel loss,” Bollig says.

Measuring stalk variability: Why it matters

University research has shown that a gap between deck plates and stalks as little as 1/8 inch during harvest can result in a 1 to 4 bushel per acre yield loss.

Drago has long described the yield-saving benefits of its automatic self-adjusting deck plates for minimizing gaps compared to operator-controlled hydraulic plates. The question has been: How significant is the advantage?

To substantiate its claim, Drago conducted three years of field research, attaching electronic sensors from Headsight® Harvesting Solutions** to the self-adjusting deck plates of its corn head. The highly sensitive sensors measured the number and extent of gap adjustments made during harvest.

Drago’s 2020 research revealed that its deck plates were making nearly two adjustments of 1/2 inch every second and 47 adjustments of 1/8 inch every second across the corn head. “What we’ve seen is that the automatic self-adjusting deck plates deliver a significant improvement to manage gaps and capture more yield at harvest,” Bollig says. “Often, gap size differences were significant enough that a single deck plate setting across all rows of the corn head could result in small ear loss, let alone kernel loss.”

Dragotec research confirmed a correlation between yield and stalk variability — within the field and from year to year. A higher yield in 2020 resulted in significantly more stalk variability.

Bollig notes that when hydraulic deck plates were introduced nearly 40 years ago, hybrids, plant populations and corn heads were much different than they are today.

“Olimac recognized the increasing yield loss that occurred from faster dry-down hybrids that were more likely to butt shell, as well as the inability of a single hydraulic adjustment to manage deck plate gaps across rows as corn heads grew wider.

“They moved on to develop automatic self-adjusting deck plates for each individual row to better manage those gaps and protect yield,” he says.

“Considering the amount of stalk variability in the fields we’ve measured, it’s overly optimistic to think that a single deck plate setting is optimum for as many as six to 16 rows across the corn head,” Bollig says, “And, as our research has shown, as yields increase, the problem is only compounded by more variability.

“In fact, we saw deck plate adjustments of 1/4 inch or greater every second per row in higher-yielding (200+Bu) corn.

“Bushels matter. We know that 60% of harvest loss occurs at the corn head. Producers should be challenging the ways they are losing yield.” 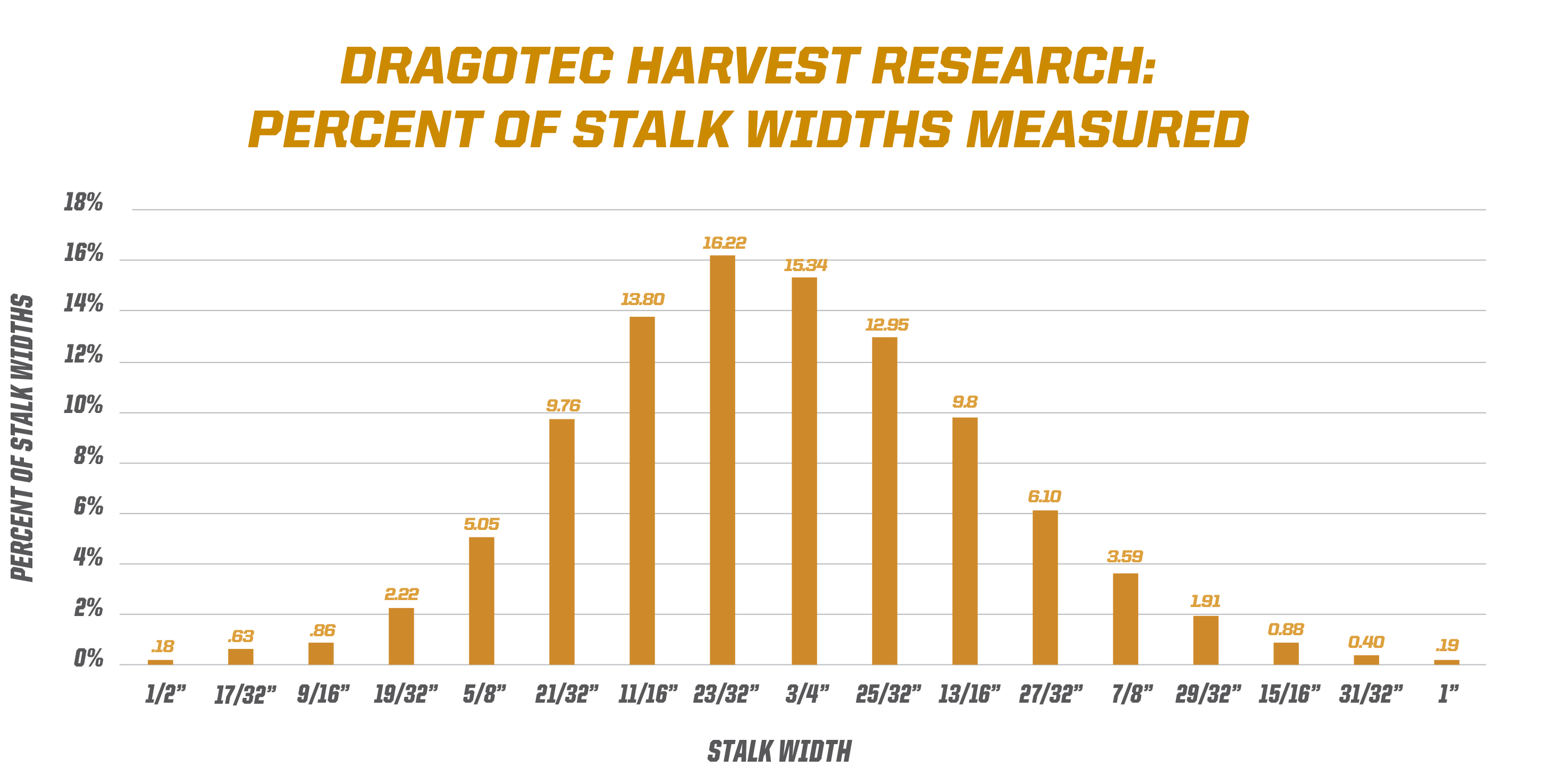 Dragotec measured the percentage of time deck plates were at various gaps. Significant variability was consistent both in-row and across the corn head throughout the study. In fact, hydraulic deck plates set for the most common stalk width would have been wrong more than 80% of the time.

A study that's one of a kind

The three-year Drago stalk variability study offers a unique insight for what’s happening at the business end of a corn head.

That’s because no other corn head brand offers automatic self-adjusting deck plates, so there is no incentive to determine the value of the manually adjusted hydraulic deck plates they market.

Three years of consistent study results prove that no other corn head saves yield like a Drago — or pays you back like one.