Every corn head brand today features deck plates as a means of limiting small ear and kernel loss at harvest. And for good reason: University studies have proven that gaps as small as 1/8 inch between plants and plates can result anywhere from a one to four bushel per acre loss.*

And while the introduction of operator-adjusted hydraulic deck plates gives producers confidence they are managing deck plate gaps and yield loss, results from a multiyear harvest study that actually measured the variability of corn stalks entering the corn head suggest otherwise.

“What we’ve learned is that growers overestimate the yield-saving ability of hydraulic deck plates in harvest conditions,” says Dustin Bollig, farmer and North American marketing director for Drago. “There is just too much stalk variability in fields for one-for-all hydraulic deck plate adjustments to close gaps and limit yield loss.”

During harvest 2018, Drago conducted an initial study to measure plant variability and the overall ability of Drago’s automatic deck plates to minimize gaps during harvest. Electronic sensors, capable of measuring movement to the 1000th of an inch, were attached to the self-adjusting deck plates of a Drago GT corn head by Headsight® Harvesting Solutions.**

“There was never a time when all row units had the same deck plate settings.”

“What we learned from that initial study was eye-opening,” Bollig says. “The sensors revealed that the stalks in our fields have a significant variability in width — more than anyone would have believed.”

The data shows that operators adjusting their own deck plates with a hydraulic control can’t possibly react to the variability that’s out there.”

A second study was conducted during harvest 2019. This study mounted the electronic sensors on the deck plates of six different row units across a 12-row Drago GT corn head. The object was to measure stalk variability of plants entering row units across the corn head at the same time. “What we learned from the second study was even more impressive than the first,” Bollig says.

“Many times the gap differences from one row to another were significant enough that a single deck plate setting across all rows of the corn head could result in small ear loss,” Bollig says. “Stalk variability is both broad and constant.”

“What is truly intriguing is that there appears to be a correlation between stalk variability and higher-yielding areas,” Bollig says. “And not what most people think.

“We plan to confirm the correlation this fall, but if this observation holds true, the added variability suggests producers using one-for-all deck plate adjustments are likely to have even more kernel loss in higher-yielding corn.”

Bollig notes that when hydraulic deck plates were introduced nearly 40 years ago, hybrids, plant populations and corn heads were much different than they are today.

“Olimac, the parent company of Drago, actually introduced hydraulic deck plates in 1982 when corn heads were relatively small,” Bollig notes. “They were certainly a significant improvement over the fixed, bolted-on plates they replaced, but by the time John Deere introduced their hydraulic deck plates 13 years later, hybrids and corn heads were changing.

“The study showed operators adjusting their own deck plates with a hydraulic control can’t possibly react to the variability that’s out there.”

“Olimac recognized the increasing yield loss that occurred from faster dry-down hybrids that were more likely to butt shell, as well as the inability of a one-for-all hydraulic adjustment to manage deck plate gaps across the rows in wider corn heads.”

“They moved on to develop automatic self-adjusting deck plates for each individual row unit to better manage those gaps and preserve yield,” he says.

“Considering the amount of stalk variability in the fields we’ve measured, it’s overly optimistic to think that a single deck plate setting is right for as many as six to 16 rows across the corn head.

“In fact, when we compared deck plate adjustments between two adjacent rows, we saw differences of 1/4 inch or greater more than 350 times in just three minutes of runtime,” Bollig says.

“Bushels matter. We know that 60% of harvest loss occurs at the corn head. Producers should be challenging the ways they are losing yield.”

Most corn growers overestimate the size of stalks and underestimate stalk variability at harvest, according to a recent grower survey* by Dragotec. 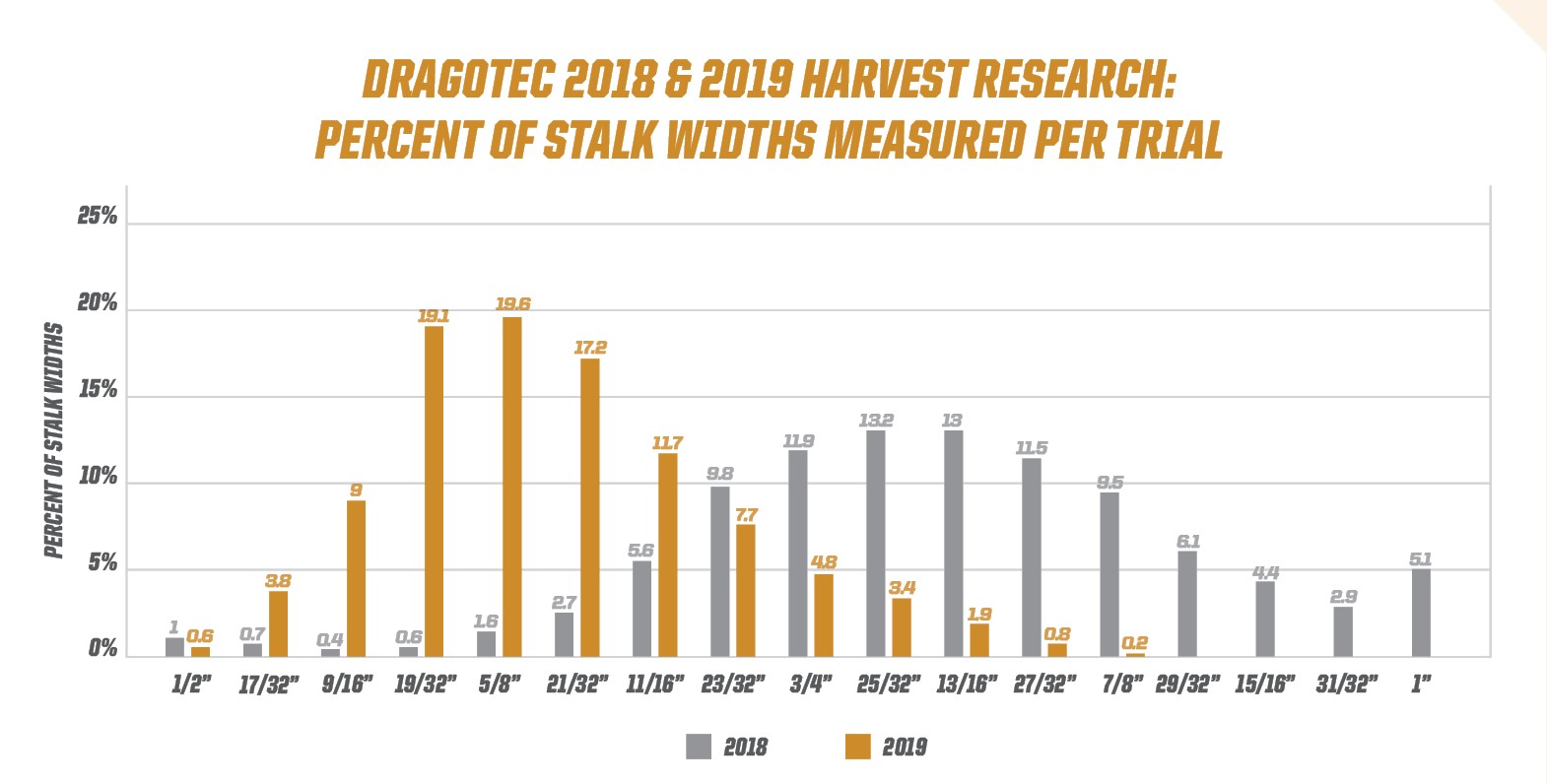 “Nearly 70% of respondents estimate their deck plates are set at an inch or more at harvest,” he says. “And nearly 75% of those with hydraulic plates said they make adjustments just two times or less per field.

“Our 2018 harvest study showed that a deck plate setting of 1 inch would be wider than stalks 95% of the time,” says Bollig. “Yet even if they went smaller to a 3/4-inch setting, for example, they would be too narrow nearly 70% of the time.”

“What we know is that there is no ‘average’ deck plate setting that works,” Bollig says. “Hydraulic deck plates set too wide means small ear and kernel loss, and plates set too narrow creates excessive trash and feeding issues. Either way, you get lost yield and profit.