Weeds Cause Corn Yield Loss From Day One

Corn yield loss can start even before seedlings emerge from the ground. New research into how plants interact with one another at their earliest stages of development has implications for weed control and preventing yield loss from weed competition as early as the first few hours of a corn plant’s life.

Though the availability of water, light and nutrients is a major primary driver for weed competition early in a corn crop’s development, new research shows processes — namely in the interactions between the crop and other invasive plant species present — at a cellular level can cause plant adaptations early on that can lead to irreversible yield loss. It’s a case, researchers and farmers say, for a “start it clean and keep it clean” approach to weed management in the early stages of a corn crop’s life cycle.

"Once you have that early weed copetition, it can cause you to lose yield and you're not going to get it back," says Fenton, Iowa, farmer and Dragotec USA president Dennis Bollig. "You might survive the early-season challenges, but you will restrict that plant's overall performance, and that leads to yield loss."

A new approach to weed competition

Clarence Swanton has spent the bulk of the last two decades studying how corn plants communicate with weeds, and what that means to early yield loss potential. That work has yielded a new understanding of the changes corn seedlings undergo that ultimately lead to as much as 3.3 bushels/acre/day of yield loss, says Swanton, a University of Guelph weed scientist in Guelph, Ontario. Plants begin adapting as they are emerging, a fact that led Swanton and fellow researchers on a new path with their research, one that bucks previous theories on when, how and why weeds begin to compete with crops, ultimately robbing them of yield potential.

“The general dogma in weed science is that weeds compete for nutrients, water and sunlight. That’s impossible at these early stages,” Swanton says. “This early, there’s no competition for light, and if you’ve stuck to your agronomic plan, there’s no shortage of fertilizer and there’s typically not a huge shortage of water. So, we started looking at whether plants can detect their neighbors and if there is awareness of other plants around them. The answer is yes.” 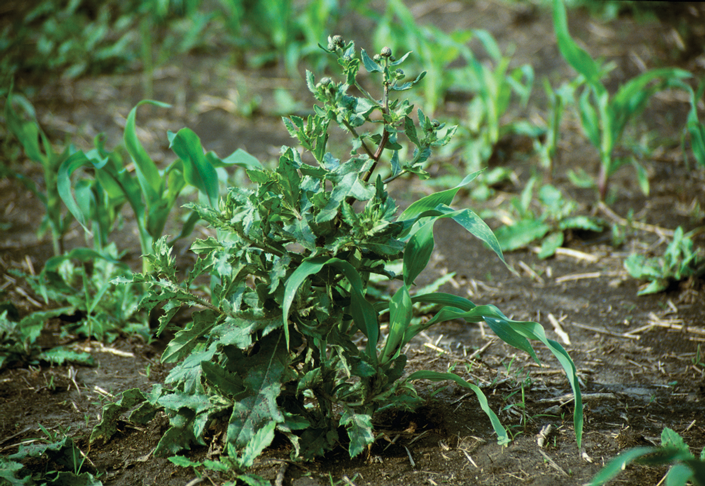 It starts in the leaves of both weed and corn plants. Even before a corn seedling has emerged, it can “sense” the presence of weeds via the phytochrome in those weeds’ leaves. That green pigment in leaf tissue that helps regulate plant growth through photosynthesis gives off a specific “signal,” alerting other plants’ to its presence. And, when a corn seedling receives that signal, it begins adjusting growth patterns to protect it from that weed, and those growth patterns and resulting in permanent, irreversible yield loss.

“We have evidence that even before the corn plant has emerged, it’s already detecting its environment and it’s already making molecular changes based on what it senses above the ground. A plant can suppress photosynthesis, change carbon or root activity or create an explosion of free radicals within the corn plant’s oxygen modules, all because these plants are simply communicating,” Swanton says. “The presence of a weed can trigger a lot of biochemical reactions in the corn plant, and that can lead to oxidative stress.”